For the Hack Aye element of the day, visual artist Catherine Weir challenged participants to consider identity representation in the context of protest. A number of images of people involved in activism were presented, in particular showing protesters holding banners. Participants were asked to consider the merits and drawbacks of being represented using a banner.

The young people present then collectively decided whether or not they wanted to use the medium of a banner to represent themselves on May Day. Having decided that they would, they then discussed what the theme of their banner would be. Via a mock campaign, participants were encouraged to focus their banner on a positive representation, i.e. to try to make it about something they did want rather than something they didn’t want.

Working in small groups, participants sketched ideas on a few themes, some dafter than others, from football to chocolate and beyond. The group as a whole then voted on the pictures they had worked on, choosing one to represent them – the theme was gender equality. This banner was then created, and appeared at the May Day parade in Glasgow. 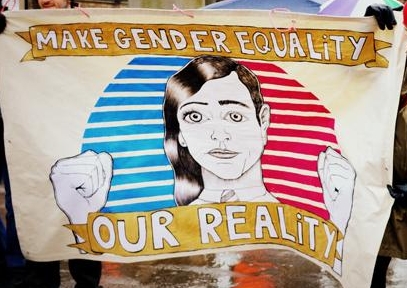