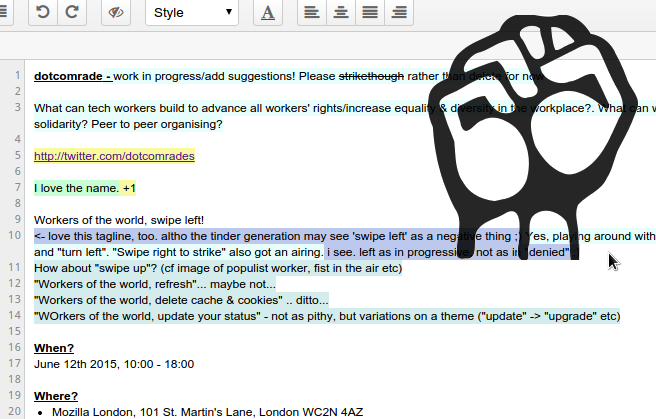 Sue is delighted to be taking part in the first Dot Comrades hackday in June! A new initiative to mobilise techies to advance workers’ rights, Dot Comrades will use the tools, resources and practices in open source development to hack organised labour, from equality and diversity to networked solidarity. We’ll be looking at opportunities to use technology to catalyse new and traditional models of activism such as the trade union movement.

At Hack Aye we believe the organising approach and decentralised ideology represented by many open source projects has the potential to be hugely useful in activism. Community-driven software projects share many of the same characteristics as emerging movements, with participants uniting around a shared goal, then connecting to serve that goal in a way that suits their unique situation.

Campaigns in the US such as #FastFoodGlobal and #FightFor15 as well as non-work related movements such as #BlackLivesMatter and in Scotland Radical Independence exhibit such non-hierarchical structures. By utilising the web / social media effectively these movements are mobilising unprecedented numbers of people with no prior involvement in political activism. We’ve barely scratched the surface of how technology can empower organised movements – what else can we build?

In true open source style, this project is collaborative from the outset, with contributors free to weigh in on what Dot Comrades could/should build. Participants are starting to explore where things might go on this shared document: https://etherpad.net/p/dotcomradealpha [refresh the etherpad a couple of times if it doesn’t appear straight away]

The hackday will be at Mozilla’s London office, however Dot Comrades will also welcome remote involvement either individually or in groups wherever you are – if you’re interested register on the etherpad and join in on the day!